Galaxy Note 5 and its retail box photographed in the wild

The Samsung Galaxy Note 5 is like a teenager in front of a mirror – ten new photos fly out to Twitter each minute. Here’s the budding adolescent showing off its S6-like design, trademark S Pen and this time – it’s retail box. 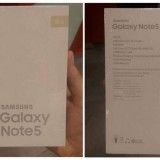 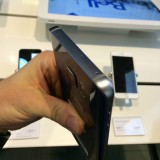 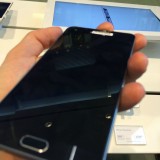 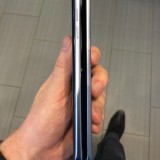 Spy photos of the Samsung Galaxy Note 5, including its retail box.

Here’s hoping the rumors are wrong about only the dual-SIM model having a microSD slot, 32GB is a tight fit (64GB and 128GB will be available, for a price). Anyway, the card(s) slot moved on top since the glass back is sealed. The S Pen is still on the bottom as usual, near the microUSB 2.0 port (Samsung dropped USB 3.0 and apparently isn’t rushing towards Type C).

Nothing unexpected this far – we’re just days away from the August 13 Unpacked event that should launch the Galaxy Note 5 and the Galaxy S6 edge Plus.